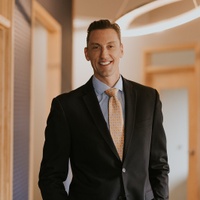 Before arriving at Taatjes Financial Group, Jerrid was a TV meteorologist. He started his TV career in 2002 at the NBC affiliate in Sioux Falls, SD. Over the next 12 years, he eventually landed at KARE11 in the Twin Cities. In 2014, after much contemplation and prayer, Jerrid left his TV career. It was a move that came as a surprise to many people, including some of his family. But, it was apparent to Jerrid that he was being called in an entirely different direction.

With a tentative plan to head back to where it all started in Sioux Falls, Jerrid instead found himself unemployed with few job prospects out west. At the time, his soon-to-be future boss, Ben Taatjes was searching for the right person to help market his business, motivate people with their lives and finances, and inspire people to live for "True Wealth". Following a hunch after hearing Jerrid speak at a Willmar fundraiser the year prior, Ben decided to give him a call.

As they say, the rest is history. Jerrid started at Taatjes Financial Group in November of 2014 running the marketing efforts for the company. However, his position and duties has continued to grow steadily over the years. Most recently, he was promoted to Director of Business Development in November of 2020.

Jerrid continues to utilize his broadcasting background at Taatjes Financial Group through public speaking, radio and podcasting. He has keynoted over 150 events to audiences ranging from teachers to farmers to corporate executives. Sebesta hosts a weekly radio show called True Wealth Radio on KWLM which can be heard every Tuesday afternoon. Jerrid has also hosted a number of podcasts, most recently, Retire Repurposed alongside Ben Taatjes.

Sebesta believes in the importance of being debt-free and living within your means. Since arriving at Taatjes Financial Group in 2014, Jerrid has inspired thousands of people to begin their own debt-free journey through financial coaching and hosting JUMP-START | IGNITE YOUR DEBT-FREE JOURNEY events.

Jerrid and his wife, Emily, live in the Willmar area with their three kids, Beckham, Raiya and Everleigh.