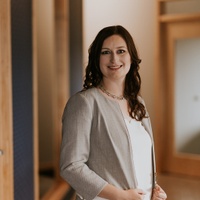 Cynthia is the Director of Client Services for Taatjes Financial Group. Cynthia joined the team in 2017 as the Director of First Impressions. She is now a fully-licensed assistant that manages our entire client services department. She grew up in Pioneertown, CA before attending Southern Utah University in Cedar City, Utah earning a degree in Agriculture Science & Industries with an emphasis on Agribusiness.

Raised on a ranch, Cynthia has a passion for horses. In fact, she competed in rodeo from childhood through her college years. "My favorite award is the saddle I won for the goat-tying event in Junior Rodeo. To this day, it's at my home in California and I've never ridden it. My mom won't let me", says Williams.

Cynthia met her husband, Sam, in Utah and were married in 2013. They made the move to Minnesota in early 2017 to follow Sam's turkey career.

The couple resides in Willmar with their daughter, Emma.